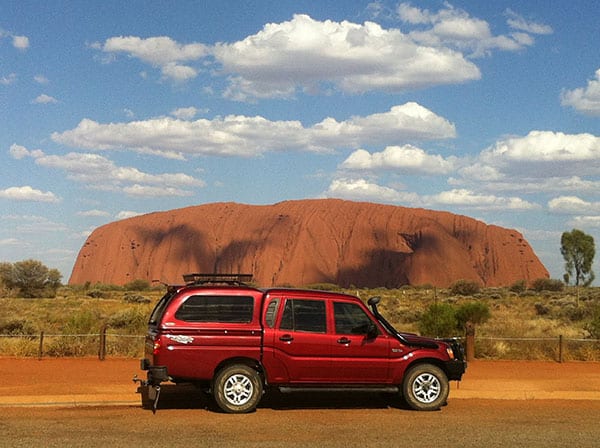 When 43-year-old electrical lines person Michael O’Brien from Deception Bay in North Brisbane found a low-mileage Mahindra Pik-Up at the end of 2012, no-one guessed where the relationship would lead.

The answer came in September 2013, when the Queenslander took his Pik-Up on an epic, four-week road trip taking in (among numerous other destinations) Adelaide, Alice Springs, Mount Isa and a total of 9900 kilometres in distance!

“I found a 2012 with 11,000 km on it from a dealer,” said Michael. “Somebody else had already thrown a bull bar, some sidesteps and a canopy on it and they were selling it for 25 grand.

“I hadn’t had anything to do with Mahindra before, so price was one of the biggest driving factors for me initially.

“After crawling over and under it, listening to it run and taking it for a little drive, I did some research and couldn’t find any issues come up with them, so I decided to give it a go.”

Michael’s Pik-Up is a styleside configuration that features the MY11 upgrade for the 2.2 litre mHawk motor, rather than the 2.5l. But he still found it particularly capable for major recreational operations.

“For a diesel motor that isn’t a massive diesel motor, it seems to have a lot of pick up.”

Pik-Up’s high power mHawk engine is a hallmark of Mahindra’s cutting-edge technology; an environment-friendly, fuel efficient power plant which, in conjunction with the standard Mechanical Locking Differential provides exceptional on- and off-road capabilities.

In the 60,000 kilometres driven since Michael purchased his Pik-Up, he’s taken in a lot of sights, including Coonabarabran, Broken Hill, Coober Pedy, Uluru, Glen Helen Gorge and the Devils Marbles.

“On the way back home in September we did the Dinosaur Track down to Winton, and then on to Hervey Bay for a week on the way home.

“I’ve also done some driving on forest trails and on the beach at Bribie Island and had no hassles with the sand.

“We didn’t do a great deal of four-wheel driving with it at first, but then we bought a caravan since then and have done a bit of travelling.

“I just can’t get over how comfortable it is, I love it. It’s my everyday vehicle for work. I can throw my gear in the back, and for a four-wheel-drive vehicle I think it’s very economical. It’s got an 80-litre tank, and I usually feel the need to fuel her up at about 850 kilometres, where it usually takes 75-76 litres.

“Even caravanning with a little Jayco Dove, which is maybe 1200 kg plus some water in it and a bit of our gear, I still managed to maintain about 650 between stops, and maintain 100 kilometres per hour. So I’m very impressed with the vehicle.

“My favourite features would be, price, comfort, and capability. I’m also really impressed with the paint job; obviously when you take it into the bush you get trees rub down the side of it, and the paint is still in great nick. I like the fact that it’s got gutters, because I carry a kayak in a rack on the roof.

“I’ve thoroughly enjoyed the vehicle, I think it’s very economical, the parts for it are cheap.

“I think it well and truly punches above its weight. If I had a choice to go out and buy a vehicle tomorrow, I’d probably go and get another Mahindra – I’m probably even more inclined to buy one now. I absolutely love it.

“The next big adventure we’re thinking of doing with it, and it won’t be till next winter, is up to the Cape. I know there’s been a few of the Mahindras go up there before, but we want to give that a go.”