When Paul Johnson isn’t pounding out 1000-kilometre weeks in his Mahindra Pik-Up for his cleaning business Sparklean, you might just find him over at Moreton Island on the tailgate, watching the sunset with a brown trout in hand. 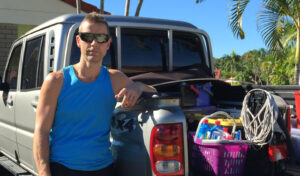 The 45 year-old from North Lakes bought his styleside Pik-Up brand new in 2012, and says it’s not only been the most economical vehicle he’s ever had, but it still sounds the same as the day he bought it.

“That’s what impresses me the most,” says Paul. “There are no rattles, no knocks in it. We do about 1000 kilometres a week on average, and it carries five people at any one time along with all my equipment, and we travel anywhere from the Sunshine Coast to northern New South Wales.”

Paul was “just driving past” his local dealer Sharpe Auto Group at Tweed Heads, when the model caught his eye. “We wanted something, but we didn’t want to pay over the top for it, because we’ve had quite a few new cars in the past.”

The Pik-Up fit the bill perfectly; a super-tough and reliable work vehicle with great fuel economy, a plush interior and a range of features designed for a comfortable ride.

“It is very comfortable to drive, the seats are very comfortable, but also the layout of it is good. You can see right around the vehicle because the windows are large, and that’s a good thing. We do a lot of backing in and out of places, as well as a lot of highway driving.

“This is our first Mahindra and by far this has been the one vehicle where we’ve had the least trouble with. We’ve racked up 110,000K in it in two years, so it’s been tested to the limit.”

At the centre of the equation is Pik-Up’s 2.2 litre, common rail M-hawk engine – a fuel efficient power plant with cutting-edge technology – a joint development between Mahindra and Austrian diesel powertrain engineering specialists, AVL.

“Handling has been great; with the right tyres on it it’s very good in all conditions and the braking on it has been very good, there are not too many vehicles where you can be over 100,000 kays and not change your brake pads. We’ve just done 110,000 on the same pads and the rotors are still fine too!

“I also like that it’s not overcomplicated with gadgets you’ll never use, it’s just straightforward. We had a hire car a couple weeks ago when it was in for a service, and you’ve got all these bits and pieces of stuff you’ll never use in a lifetime.”
Paul has also tested his Mahindra off-road, where its Eaton mechanical diff-lock, low-range 4WD function and auto-locking hubs provide terrain-beating performance.

“We’ve also done four-wheel driving in it, and it’s never looked as though it’s going to get stuck on the beach, so I’m well pleased with it.

“Moreton Island is my favourite leisure destination, and it’s been great on the beach, especially in the evening. You know when you’re playing cricket, and you drop the back down, sit on the back and have a few beers, watch the sunset…”

“We’re just waiting for Mahindra to bring out a new model which they say they might be doing next year, so I’m going to hold off until such time.”