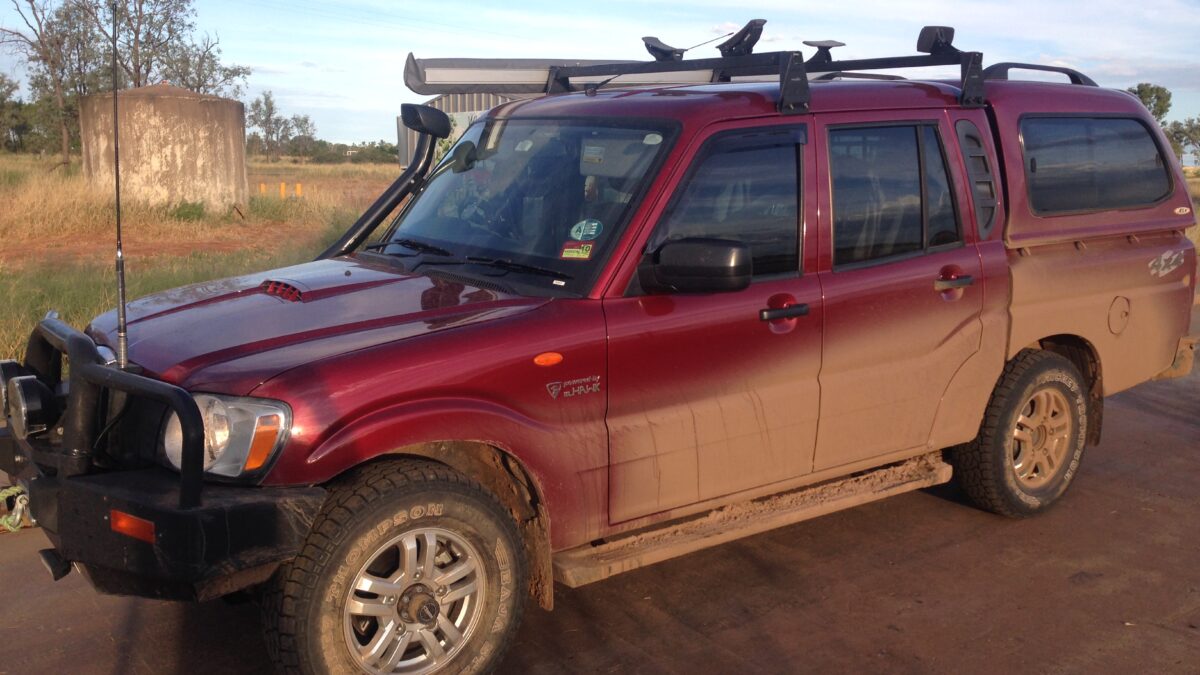 You’ve got five days off, an off-road van and a Mahindra Pik up. What do you do?

Not one to waste a long weekend, forty-three–year-old electrical lines person Michael O’Brien knew the answer without even thinking about it. He and his partner Tracey boosted off on a quick, 2300-kilometre round trip to Queensland’s famous Carnarvon National Park in Central Queensland.

Approximately 65,000 visitors a year flock to see the wind and water eroded landscapes which are dated at least 27 million years old.

On the Friday night, Michael parked his 2012 Mahindra Pik-Up at the van park at Rolleston, about 800km from his home at Deception Bay in Brisbane, and just an hour away from Carnarvon.

Michael’s Pik-Up is a styleside that features the MY11 upgrade for the 2.2 litre mHawk motor.
He finds it particularly capable for major recreational operations – and when we say major…

In September 2013, he took the Pik-Up on an epic, four-week road trip which took in (among numerous other destinations) Adelaide, Alice Springs, Mount Isa and a total of 9900 kilometres in distance!

“We had a quiet first afternoon and night in town, then drove to Carnarvon on Saturday,” said Michael. “It was a great day – we walked into six areas covering some 28km for the day, leaving late in the afternoon after some rain. The dirt road back was a little slippery – not a problem for Maxi the Mahindra though!

“After the walking we did Saturday we decided to give our legs a rest on Sunday so we drove to Springsure to look around and take in some of the history of the area including Fort Rainworth.

“We had dinner at the pub that evening and talked to the locals about our travels then on Monday we returned to Carnarvon to do at the walk Boolimba Bluff. This gets you up on the top of part of the plateau where you can see for miles, and after ascending and descending the ladders and steps it was time for a swim at the Rock Pools, to put the finishing touch to a great weekend.”

Tuesday it came time for Michael to hitch the van up to his trusty Mahindra Pik-Up and return home, completing the whirlwind trip, for a total of 2321.5 kilometres.

“I can say I enjoyed every bit of it,” says Michael. “The Mahindra copes with ease; dirt, mud, rock and tar; it’s at home on all of it.”

“The vehicle tows great,” says Michael. “The 800kms to get there and then home it did really comfortably; you weren’t stuffed by the end of it and that’s something I really like about it.

“We didn’t do a great deal of four-wheel-driving on this trip, but in the 82,000 kilometres we’ve put on it in the two-and-a-bit years that we’ve had it, it’s done a lot of driving on the beach and up into the state forest areas around the Brisbane area, and it’s turned out to be a lot more capable than I ever expected. I can’t say enough great things about the truck – I absolutely love it. The best purchase I’ve made. Heaps of fun.”

The next adventure Michael and his wife have planned is a July trip out to Poeppel Corner, Big Red and the Birdsville area, and with his Mahindra Pik-Up coming up on 100,000 km, Michael is planning to add a lift kit and other suspension upgrades to see what new levels of performance can be reached.

More Information on Carnarvon Gorge can be found on the QLD Government Website at this link http://www.nprsr.qld.gov.au/parks/carnarvon-gorge/