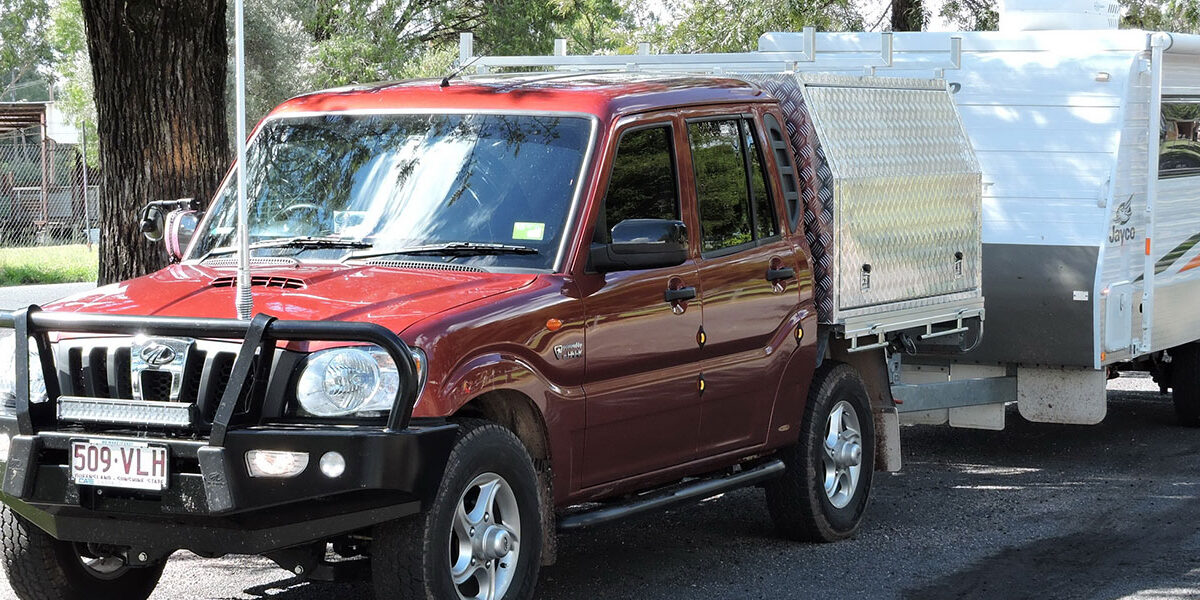 John Sainty has owned 10 four-wheel-drives but he reckons his second Mahindra, a 2015 dual-cab Pik-Up he purchased from Cassells Automotive at Warwick, is the best of the lot.

A sales rep from Forest Lake in Brisbane, Sainty dropped in a heavy duty aftermarket tray and canopy and now he and the wife use their Pik-Up as the perfect low-cost getaway vehicle.

“My previous vehicle was the 2007 2.5 Pik-Up,” says Sainty, “and my original intention was to go to a single cab, get rid of the caravan and put a slide-on camper on top, but in the end the slide-on camper project just got a little bit too hard. The funny thing is the Pik-Up has a greater payload than a 70 series cruiser that you pay $80K for, it’s just ridiculous!

Sainty did his sums, but after 10 four-wheel-drives, he found it impossible to go past the dual cab for functionality, so he finally found himself taking a 2015 Mahindra Pik-Up dual cab for a drive.

“I just couldn’t believe the difference in the pulling power compared to my ‘07. And my ’07 was a chipped 2.5 that I thought was pretty good!”

“Officially the latest mHawk has less power and torque than what my chipped ’07 had yet it just blew it into the weeds. I was very impressed.”

A joint development between Mahindra and Austrian diesel powertrain engineering

“You know the ’07 Pik-up that I had,” continues Sainty, “was the longest I ever kept any of my ten 4WDs. Normally I turn them over every two years, but this one I had for seven or eight.

“I’m not retired yet, but I will be, so my intention is just to get something I’m really pleased with, and I couldn’t be more pleased with this 2015 Pik-Up. It goes really well and pulls the caravan a gear higher through Cunningham’s gap compared to what I was with the old truck – that’s what I was after. The mHawk engine is so flexible in the torque band that you just wouldn’t believe it could be that much different.”

To enhance his camping adventures, John chose a canopy imported by Mates Rates tools at Yatala.

“It cost me just over 3200, but there was including the roof racks, the windows and a bit of extra height and a fully braced roof. I think they started off at just over $2000 and I added all the extras.

“I’ve got a 55-litre water tank and an 85-litre in-tray fuel tank, I take a generator and a blow-up canoe, this quite a bit of gear that goes in there.

John’s home away from home is a Jayco 1342 Outback with all the mod cons; air conditioning, microwave and solar panels.

Always one to beef up his 4WD’s suspension for camping and travelling duties in the past, John made some suspension modifications to his Pik-Up

“On the old Ute I had super springs underneath it, there wasn’t a size for this one though, so I hunted around and found the Timbren Aeon springs which have a rubber ring that takes the place of your bump stop. I’m quite pleased with how it sits fully loaded now, and I’m really impressed with the ride and how it absorbs potholes and things.”

We normally do between eight and 12 camping trips a year, but this year we are behind with getting the new truck organised.

“I often camp out in northern New South Wales, and we’ve done a few (for us) longer trips, like up to Longreach, but we haven’t done what everybody calls the big trips. This year though, we’re hoping to get away for about 7 to 8 weeks and go down to the Flinders and pop into Adelaide and get the truck serviced and then down to York Peninsula because the wife wants to have a look down there. That’s the plan. Whether it actually eventuates or not we’ll just have to wait and see!”