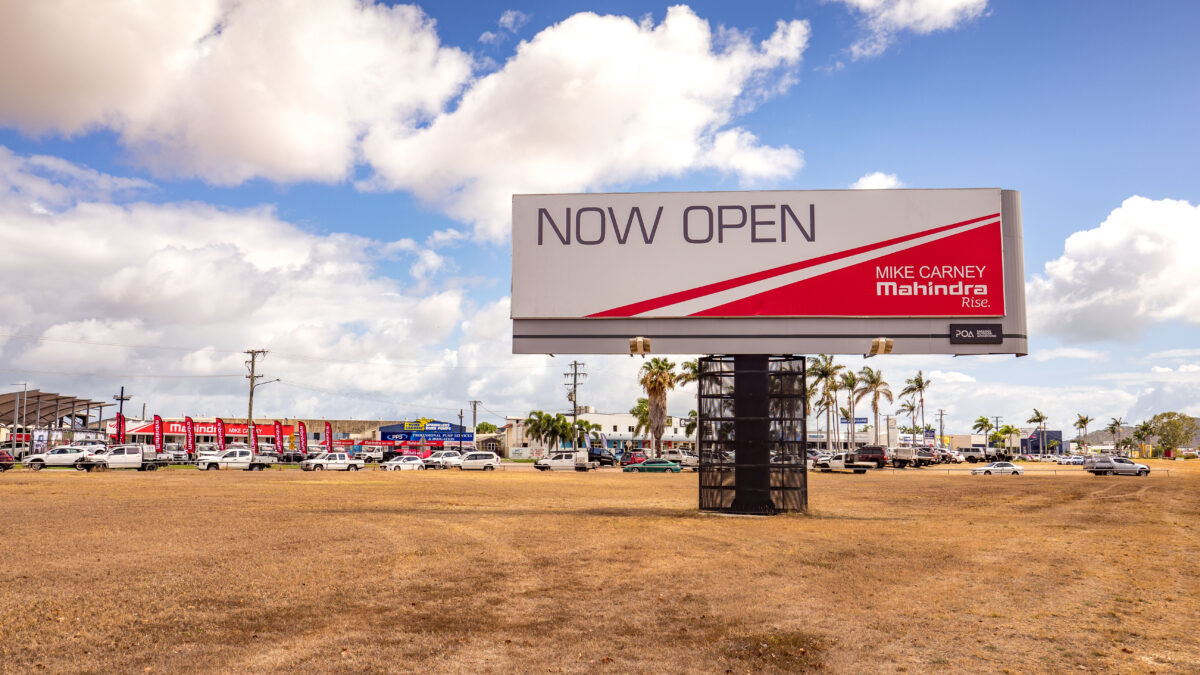 Mike Carney Mahindra’s first day of trading from their new site in Townsville, the 3rd of December 2020, is not insignificant in the history of the Mike Carney Group. “On this day in 1982 my father opened our first dealership in Charters Towers with Toyota. Now 38 years on we are proud to be operating our second Mahindra dealership, from Townsville on the 3rd Dec.” says Chris Carney

Its been a deeply researched and personally tested journey with Mahindra over the past 18 months. “We opened in Charters Towers in August last year, initially with Automotive and a few months later with Mahindra Tractors and it has been a very successful strategy introducing the Mahindra range to our local community, where we have had businesses for over four decades.“ says Mr Carney.

In his own personal Mahindra PikUp, Mr Carney has completed over 34,000km’s of testing, everything from cold and alpine testing in NSW Alps through to well-known tough and difficult tracks in Far North Queensland like the Creb Track and Old Maytown Road. “Even though Mahindra has been building four-wheel drives since 1949 and one of the longest standing manufacturers of four wheel drives in the world, we wanted to test the product ourselves, so that we could put our name behind, support and trust a product that would deliver the expectations of our customers.” Says Mr Carney. More Information on Chris Carney’s testing can be found here

Mahindra have been operating in Australia from Brisbane since 2005. The original Mahindra PikUp was launched in Australia in 2007 has been plying the roads of Australia for over thirteen years. Mahindra SUVs started in Australia in 2012 with the XUV500. With thousands of Mahindra Vehicles sold to Australian customers, the PikUp has built a trusted and solid reputation as a reliable, rugged and value for money ute for the Australian market. Over 700,000 PikUps & Scorpio SUVs have been sold globally since the launch of the original Scorpio in 2002 and over 300,000 XUV500s have been sold globally since launch of the original XUV500 in 2012.

“It has been an exciting year for our business” says Mr Ankit Taneja National Manager MAAPL “We celebrated in February, 15 years of our Australian operations, and on the 2nd of October we celebrated 75 years in business for Mahindra & Mahindra Limited our global parent. “It is exciting to see the calibre of dealer we continue to attract and add to our network. With this addition of the Mike Carney Group in Townsville & Charters Towers, and recent appointments of the Ian Weigh Group in Rockhampton and the Westpoint Auto Group in Brisbane we now have 42 dealers nationwide.” “With multiple new SUVs expected over the next 18 months, we look to our strong dealer network to provide the customer experience our customers expect and deserve.” Says Mr Taneja, MAAPL.

The Official Open day for Mike Carney Mahindra is being held on Saturday the 12th December. Customers can expect to see the range of Mahindra four-wheel drives, SUVs and Tractors. A visit by Mahindra Brand Ambassador, Matthew Hayden AM is scheduled, with prizes and give-aways on the day. Mahindra are a Brisbane based business and are a 100% owned factory operation backed by the global Mahindra Group.